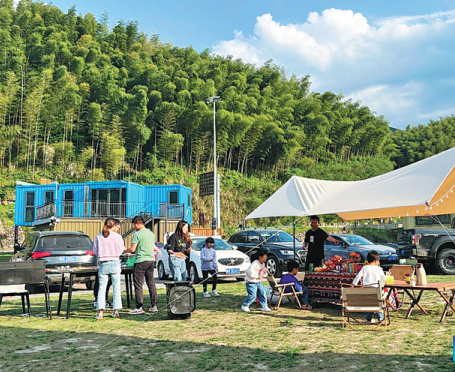 Tourists enjoy a meal in the sun during the May Day holiday in Songjiahe village in Mozitan town, Anhui province. XINHUA

How much can a mountain village change in about five years? The remarkable transformation of Songjiahe village in Mozitan town in East China's Anhui province may provide an answer.

From a remote, backward village to a must-visit tourism destination, Songjiahe's transition trajectory is nothing short of astounding.

Located at the old revolutionary base area of the Dabie Mountains, Songjiahe received nearly 100,000 tourists last year, despite the pandemic, raking in a revenue of over 1 million yuan (about $148,000).

The story was, however, completely different before 2016. The village was marred by dilapidated old houses and served only by rugged, barely passable mountain roads. Today, however, Songjiahe is connected to the outside world by black ribbons of asphalt, making it a hidden treasure amid nature's pristine artistry.

"Limited farmland in the mountainous area forced locals, especially the young people, to move out of their native village and seek employment in big cities," says Cheng Hao, a native of Songjiahe.

Due to poor transportation in the deep mountains, locals were even reluctant to go to the county seat 40 kilometers away, says the 33-year-old Cheng, who played a major role in Songjiahe's transformation.

"I began working in the county seat in 2011 after graduating from university, but, in 2016, I made the decision to return to Songjiahe and work to improve my village," he adds.

After his return, Cheng joined the family-run tea business and started to incorporate his own ideas. Thanks to the standardized tea production workshop that he set up, the income of local tea farmers increased by 15,000 yuan per household, and in 2021, the village's income from tea production exceeded 10 million yuan.

However, in Cheng's view, given its seasonal nature, tea alone was not enough to bring about fundamental changes in the village. So, he continued to explore more pragmatic and viable solutions.

Cheng formed a team of more than 10 individuals, all under the age of 40, since new industries require youthful energy. Many of them are from Songjiahe, who have returned to their rural home from big cities.

Since 2018, Cheng has led his team to work with the local community, setting up a tourism company and exploring new ways to integrate the development of cultural tourism, rural tourism and ecotourism.

Several "wandering cabin" homestays have been set up to attract tourists. "I bought them from South China's Guangdong province last year and these cabins feature a standard hotel room," Cheng says, adding that his team has also built a river rafting project, spanning about 1 km, in the village.

With limited long-distance travel due to sporadic, domestic COVID-19 resurgences, camping has become a popular holiday activity among Chinese people. Cheng jumped on the bandwagon and purchased tents, awnings and barbecue grills to rent out at the start of this year. During the May Day holiday, Songjiahe village held more than 20 camping activities.

"We will continue to enrich our tourism sector to ensure Songjiahe attracts more visitors," Cheng says.