Cultivating global talent for the future, the world

Guo Moruo (1892-1978), the first president of the University of Science and Technology of China, and Yan Jici (1901-96), the second USTC president, had the same aspiration to nurture top talent for the institute.

Guo calls on the faculty and students alike "to scale the peak of science" in the university anthem The Eternal East Wind he wrote in 1958. That year, USTC started its operations. Guo served as USTC's president from 1958 to 1978.

Yan, the second president of USTC, proposed a goal for the university in 1988 "to build a globalized academy and to nurture worldwide talent".

Behind their aspirations was China's ambition to boost the development of the country's science and technology and its need to cultivate top talent.

Following the founding of the People's Republic of China on Oct 1, 1949, the Chinese Academy of Sciences was established that year. Guo served as the first CAS president and to pursue new progress, the nation established USTC in 1958 in Beijing. USTC was relocated in Hefei in East China's Anhui province in 1970.

To educate top talent with noble ethics has been regarded as the fundamental task of USTC since its establishment, along with its mission "to promote science and education to serve the country and the society".

Recognized as the "cradle of scientists" in China, USTC is now home to 16,245 gifted students and 2,050 academic staff members.

USTC took the fourth spot in terms of academic performance among global universities and ranked first in the Chinese mainland in the Nature Index 2020 Annual tables. It is ranked third among the best global universities in China by the US News Rankings 2020.

Internationalization has been the pride and historical heritage flowing in the blood of every USTC student. Since 1958, the USTC has been at the forefront of the world in scientific fields.

After a large number of scientists, such as Qian Xuesen (1911-2009), Guo Yonghuai (1909-68), Yan Jici and Zhao Zhongyao (1902-98), completed their overseas studies, they returned to China and devoted themselves to building the country. They formed an outstanding faculty with strong international influence in the USTC. These world-renowned scientists helped to train many outstanding talents to support the development of China's first nuclear bomb, missile and satellite as well as research on cutting-edge science and technology, thus laying a solid foundation for the development of science and technology in the PRC.

Over the last few decades, USTC has made significant achievements in fundamental science and research, especially in the fields of quantum physics, nanotechnology, artificial intelligence, engineering and biomedical sciences.

It launched Wukong, China's first dark matter particle explorer and Micius, the world's first quantum communication satellite, in 2015 and 2016 respectively. In 2020, the university developed the "USTC protocol" to treat COVID-19 patients, which has been introduced to more than 20 countries and regions.

USTC has carried out multichannel, high-level and substantive international cooperation and exchange activities to strengthen its internationalization capacity. It collaborated with more than 210 top universities and research organizations from 35 countries across the world.

USTC has 849 international students; more than 70 percent of them are doctoral candidates. In 2019, 1,800 foreign experts from 46 countries visited USTC for research and teaching and 2,100 students participated in USTC's Study Abroad program.

USTC has been committed to expanding students' global vision and strives to make them more professional in work.

FuSEP aims to bring excellent young scientists from all over the world together to exchange ideas for solutions to world challenges through science and technology.

Meanwhile, USTC has been the only founding member of SUGAR in China since it partnered with Stanford University to offer the redesign course in 2011.

In October 2018, the SUGAR Global Kick-Off Event was launched at USTC, the first time that SUGAR was held outside Silicon Valley.

Peter Mascher, the William Sinclair chair in optoelectronics and vice-provost for international affairs of McMaster University in Canada, said USTC students are "exceptional both academically and in their drive to seek excellence." 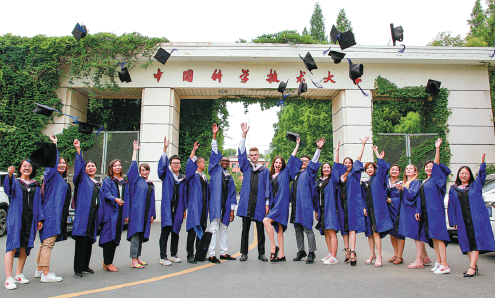 Graduates celebrate in front of the University of Science and Technology of China. CHINA DAILY 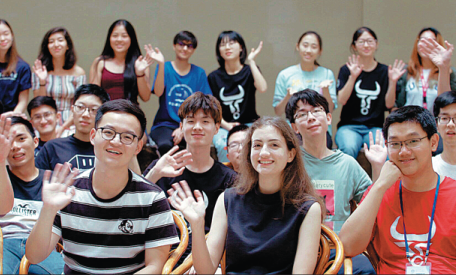